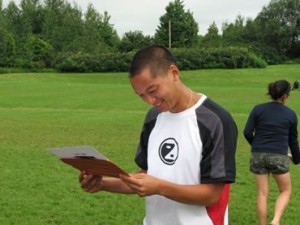 Player #32 Shawn started playing Zen in its formative years, then took a break for a while and eventually returned as captain for two consecutive years. Around and in between, he played MMV, Roy, and Monster. In the past few years he’s helped out by coaching and has been known to cleat up and throw a point when an injury calls for it.

Captaining in 2008 with Chris Loat.