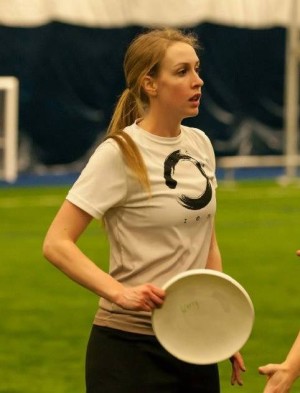 My favourite memory with Zen was when we were at 2012 Regionals in North Bay, and had strapped the Gender Blender Spirit Trophy we won the month before into the passenger seat of Vaylen‘s car.  We took the trophy with us to a throwing session on the beach. We then played spirit games as the sun was setting. So much Zen love was in the air.

One of my other favourite funny memories with Zen is when we were playing the knights/horses/princess spirit game and after “Princess” was called Nick and Chris ran at each other and both jumped to be the princess being caught, causing them both to land flat on the ground when neither caught the other.

Do it! Your game will improve significantly over a short period of time, as long as you commit to the team. It’s only as big of a commitment as you make it out to be. I think you will find you WANT to see your team at practice and can’t wait to go to a tournament on the weekend. You should be excited about having your fitness level pushed, and learning new strategies. Be an intense and aggressive player in practice too, not only in games. Look forward to having the support of great teammates around you, and to making friends that really will last beyond the field.