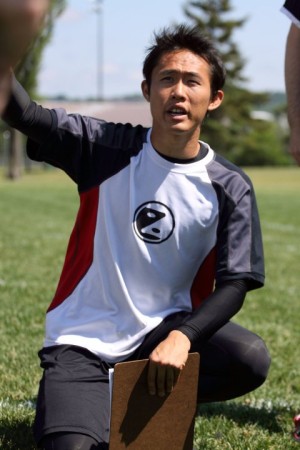 Norm has been a long time player and leader of Zen.  From his younger days as the enthusiastic gamer, to the intense workout machine of a leader, and the inspirational coach, Norm has done it all.

There are so many moments with the various Zen teams over the years that it is hard to narrow it down to just one moment. Of course any nationals moments with Zen was a great experience. Probably more so in 2011 because at that point so few people on the roster had been to nationals. Several had been touring for years and enjoying their first nationals experience was awesome.

Many people ask me “what can I do to get better?” or “how do I make X team?”.  I’ve spent countless hours helping people in their attempt to improve their Ultimate careers. The thing I’ve noticed most is that there is a big difference between thinking you want to improve and having a need to want to improve. I’ve been cut from more teams that I can remember. Each time it fuelled me to want to be better. You have to have that drive to improve yourself. Hitting the gym, running hills, practicing throws! No one is born an Ultimate player, the best players in this world are the best because they have put in the time to perfect their game. Most players just think they want it.